Statement by Dr. Barryl A. Biekman | Chair of the National Platform on the Dutch Slavery past

The National Platform on the Dutch Slavery past noticed with satisfaction the consequent use of the term Afrophobia in the press article of the Rapporteur. This is an important development in the struggle by people of African descent in the Netherlands and others of Good Will globally, for the recognition of this term as the concept that define the multiple forms of racism against Africans and people of African descent. This in itself is an important development because of the continuous difficulties of undermining the recognition and introduction of the term in anti-racism policies and the development of specific instruments in the Netherlands. During several meetings at the UN we have noticed opposites from certain segments. We hope that the Netherlands will demonstrate Political Will and give recognition to the realities of Afrophobia. 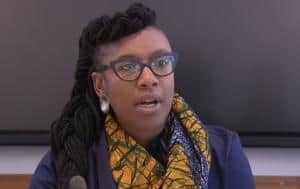 We quote: “Black Piet. The figure of Black Piet in Dutch cultural life has been the subject of prior human rights analysis, 34 and remains greatly contested in the Netherlands. There are many for whom this remains an innocent cultural performance, but there can be no doubt that the figure of Black Piet embodies degrading and dehumanizing racial stereotypes about black people, reflecting both unconfronted colonial legacies and the persisting subordinate status, especially of Dutch people of African descent. A genuine commitment to racial equality, non-discrimination and inclusiveness requires national and municipal authorities to play their part in engaging with racial and ethnic minority communities, especially people of African descent, to ensure that state-sponsored cultural events and narratives are transformed to fully reflect the Kingdom of the Netherlands and its people.”

The National Platform on the Dutch Slavery past is less satisfied about her last statement.

We quote: “The Special Rapporteur learned that there have been important developments where this issue of Black Piet is concerned, including the decision not to include Black Piet in this year’s televised national Sinterklaas parade, as well as the constructive and inclusive processes that the city of Amsterdam and others have pursued to combat racism and embrace cultural expressions that better reflect Dutch diversity. She commends these efforts.”

The National Platform on the Dutch Slavery past is of the opinion that the UN Special Rapporteur has not been informed well about the Soot Piet that has been introduced. Soot Piet is an expression of the already common racial language to demonize and dehumanize the color of the black skin with regards to the concept of colorism.