“We write history every day. What matters is who writes it,” remarked journalist and writer Marvin Hokstam from Ghana earlier this week, where he attended the unveiling Monday of a photograph of the Surinamese slave liberator Kap’ten Broos at the Assin Manso open air museum. “It is historic that this hero who the history of the colonizer almost forgot, still gets a spot among other heroes who resisted their marginalization. This time we are getting history right,” Hokstam said. 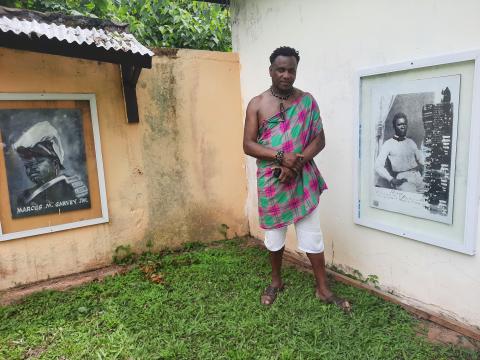 Kap’ten (which stands for Captain or Chief) Broos, was a freedom fighter who in the 19th century led the “Baka Busi S’ma” (People from behind the Bush), a band of enslaved Africans who had escaped slavery and attacked the colonizers’ plantations from their stronghold at Rorac. This impenetrable spot was located behind the Rac-a-Rac plantation on the Suriname River, at a few hours sailing upward from Paramaribo. Among these Maroons was also Kaliko, Broos’ brother, his sister Madrijntje, as well as his mother Ma Uwa and his grandmother Ma Amba, who had been born in Africa.

Broos is the only slavery hero from Suriname of whom an actual photo exists. The black and white photograph was supposedly taken in 1862, when he travelled to the capital of Paramaribo, to sign a peace accord with the then Governor of Suriname. That is when he was granted the title of Kap’ten and given Rorac, which is still owned by the descendants of his and Kaliko’s. Some say that given that he conquered the land during his resistance against the colonizer, he should be considered a “Granman” or King and not a chief.

Hokstam, who was born in Suriname and worked in the Caribbean as a journalist before relocating to the Netherlands, agreed.

All of our ancestors who fought back against the oppressors and carved out kingdoms in the hinterland from where they ruled, should be called kings.”

He quoted Ghanaian tour guide Kwame who welcomed his party at Assin Manso. “Until the tales of the hunt are told by the lion, they will always favor the hunter.’ History is fickle. It only keeps certain people alive. That is why it is important that we start telling our own history. Today is one of those days when we get to write our own hero into history. We get to give King Broos a spot among other Kings and Queens who withstood, who conquered, who ruled.”

He noted that the event that took him to Ghana filled him with a special pride. “I am in Ghana today to mount his photograph at the museum in this sacred place Assin Manso and that’s a historic moment. King Broos was my his great-great-great grandfather. He was grandfather to my grandmother Bertha Deekman. Today I am bringing him back home to where his grandmother was stolen from. As he stands proudly among other liberators from all over the world, he represents the hundreds of other liberators from Suriname and the Caribbean who the history that was written by the colonizer has chosen to forget,” Hokstam said.

Assin Manso is located at the Slave River in Ghana, where captured Africans were given one last bath before they were marched to human markets that dotted the Cape Coast; it was a hellish and treasonous hike that many did not survive. Cape Coast Castle and Fort Elmina, the two most well-known markets were located at a 60-kilometer distance.

Assin Manso is considered a sacred place and visitors may only enter barefoot. The Ghana Tourism authority erected an Ancestral Gavresite here, where -among other- the remains of an enslaved African that had been taken to Barbados for instance, have been buried. Barbados Prime Minister Mia Mottley in 2019 visited Assin Manso in 2019 and brought with her the remains of this unknown enslaved African site.

The site also features pictures of well-known historical figures in an Exhibition of Liberators, among them Harriet Tubman of the Underground Railroad, Jamaica’s Queen Nanny, Sojourner Truth, Martin Luther King, Malcolm X and Ghana’s first democratically chosen president Kwame Nkruma who led his country to independence from Britain in 1957.

The initiative to have King Broos’ photograph at this site got underway when Otmar “Kodjo Koemabala” Watson, an acquaintance of Hokstam’s and director of the Afro cultural foundation Untold in the Netherlands, visited Assin Manso last year. While touring the facility Watson discussed the possibiulity of having a Surinamese anti-slavery hero added. “When I returned to the Netherlands, I discussed it with several people -among whom Marvin Hokstam- and we agreed that it should be King Broos, because he is the only one of whom a photograph exists. Of course, we have hundreds of others who resisted - Boni, Baron en Joli Coeur to name a few-, but now King Broos represents all of them symbolically.”

As long as the tales of the hunt are told by the hunter, they will not favor the lion

The portrait that was mounted is a piece of art by Dutch Surinamese artist Remy Jungerman, who is also a descendant of Broos’ sister Madrijntje who also lived a Rorac. In "CAPTAIN BROOS", which he produced in 2006, he superimposed the historic photograph of Granman Broos on a silkscreen, with vertically to his right a group of Maroon Granman. “This piece links me to my ancestral history. I am honored that Broos will come to be mounted in this setting in Ghana, where he will stand for Maroon leaders who did not bow to the colonial rulers. I am also honored that as an artist I could be inspired from this source that has such a rich cultural history," Jungerman said.

He noted that the piece will also be featured in his upcoming November 2021 solo exhibition in the Stedelijk Museum in Amsterdam. A copy also hangs in the Saamaka Maroon Museum in Pikin Slee, a Maroon village in Suriname.

The ceremony on Monday to mount the photograph in the Exhibition of Liberators, was led by Okomfo Nana Efua, a priestess of the Afro Surinamese Winti faith, who also goes by the name Marian Markelo. King Broos came to be placed alongside the photograph of Marcus Garvey.

Nana Efua called on the ancestor to lend his descendants all his strength that enabled him to resist the European oppressors. She named all the Surinamese family names that descended from Broos, Kaliko and his siblings and stressed. “Today, as we are giving you this spot that you deserve, we are all your descendants. We express gratitude for this important moment; as of today, one of our big heroes stands here firmly, on behalf of all of our great heroes. That their ancestral spirits may lead us,” she said.

The delegation that took the photograph of the freedom fighter to Ghana, returned to the Netherlands on Friday. Hokstam: “It is my first time to Ghana, but it will not be my last time. I recommend this trip to anyone who is descendant from enslaved Africans. This is part of our history. Ghana should be kind of our Mecca.”